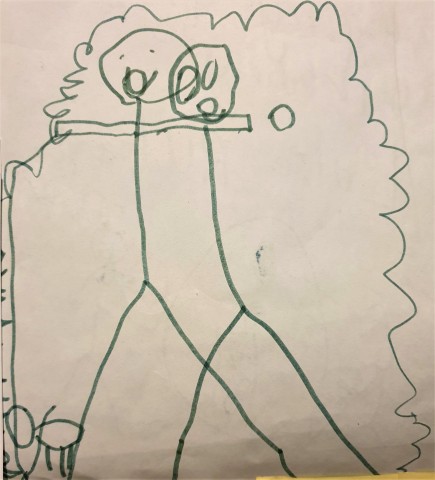 Mopping my floors is a time consuming, mundane job when most of what we walk on in our home is polished wooden boards. No one’s home on this particular mopping day and so it’s just me and my damp mop, one of those Enjo-Sabco types that when wiping over the floors requires more muscle means the cloth pad of the mop is drying out and needs water. This requires either sliding the mop pad off and rinsing it under a tap or pouring water onto it from a cup that moves with me from table to bench top. It’s even dull writing about it, but stick with me.

Mopping around the heater vent in the front entry, I chuckle out loud. The spike of autumn shoots through the flyscreen door and I glance into the street for anyone walking by that might catch me laughing at nothing. People are always walking past our home, more so during the Corona lockdown.

It was a few days earlier that I first glimpsed a round container full of white, thick goo on the floor by this heater vent I just mopped around. At first, I wondered whether I’d put my sour dough starter there, only to quickly realise that my starter was growing in a jar and not in a plastic container. I laugh again, remembering the container, and keep mopping. That kid, always inventing or exploring something science and engineering. I kept meaning to ask him what he was doing with the container but he’d been flitting between work and online Uni classes and I couldn’t catch him long enough to ask. I didn’t dare open the lid, didn’t want to discover anything disgusting growing or brewing with the heat. I laugh out loud again, this time so hard that I had to stop mopping. That kid.

The same morning of finding the container by the heater vent, I was in the sunroom on the phone to friend when I heard music. I followed it into the lounge room where my son’s phone lay on the floor, beside a blanket. It was his alarm sounding to wake him for work. I thought it odd as he always takes his phone with him into his bedroom. He must’ve fallen asleep on the couch and dropped the phone and blanket on the floor as he got up to go to bed. I took his phone into him and asked him why it was in the lounge room. He didn’t know. Making breakfast 20 minutes later, I asked him whether he’d fallen asleep on the couch. He replied again that he didn’t know. I smiled, thinking he was probably still half asleep. He’d been working long hours over the past week.

Later in the evening after finishing work, my son walked through the backdoor.

‘Good,’ he says, smirking. ‘I don’t know what happened last night, but I think I was sleep walking.’

I laugh and stop clearing the kitchen bench from the onion skins. ‘Why, what makes you say that?’

‘I don’t know,’ he says, sounding unsure. ‘I don’t know how my phone got onto the lounge room floor but I think I remember getting up after going to bed, to watch TV.’

‘You used to sleep walk when you were little, but you haven’t done that in years.’

‘Yeah, I sort of remember that,’ he says.

‘I used to lock the doors at night because I would find you in some strange places and I was worried you’d one day walk out of the house.’

‘That’s a bit dangerous, deadlocking the doors when we’re sleeping. What if we had a fire, and couldn’t get out quick enough.’

‘I know, but I was more worried about you sleep walking into the street and being hit by a car. One time I found you in the dining room,’ I laugh. ‘Do you remember that?’

‘Yeah, I was asleep on the floor.’

‘Asleep under the bloody chair, exactly where the dogs lay when we have dinner!’

‘I remember,’ he chuckles.

‘You must’ve been four or five at the time. Honestly. Sometimes I’d wake for no obvious reason to see you standing in the hallway, trying to work out where you were. I’m not sure what would wake me but one time, I woke to hear you call me and I found you standing in the dark in the laundry, not doing anything. Just standing there, calling me.’

‘You sleep walked for a few years, maybe from when you were about three until about eight years old I think. And then it just stopped. Until the other night!’

After two days of looking at this science experiment container on the floor, I’m in the kitchen making a pot of tea. As the kettle heats the water, I draw open the curtain in the lounge room and notice the container in the front entry had disappeared. That kid, he must’ve done something with his experiment after I went to bed last night.

My son wakes soon after and almost prances into the kitchen. ‘I know what that container was.’

I look at him, thinking yes, great, the experiment’s finished. I know that.

‘It was the houmous.’

‘What?’ I begin smiling.

‘It was the houmous. I went looking for some in the fridge last night, for a snack, and couldn’t find it. Then I walked past the container near the heater vent and thought, that must be the houmous.’

I laugh out loud. ‘What do you mean?’

‘I think when I was sleep walking the other night, I must’ve eaten some houmous and then went to put it away in the fridge but for some reason, thought putting it near the heater vent was putting it in the fridge.’

We both break into raucous laughter.

I can’t say whether he was laughing as hard as me that morning, as I couldn’t see through the tears I was laughing.

Great story! Can relate as our son did the same as a child. One night we heard the front door opening and, to this day, we still don’t know whether our son was going out or coming back in! He was about 8 years old. Very scary!

0 Cancel Reply
Great story! Can relate as our son did the same as a child. One night we heard the front door opening and, to this day, we still don’t know whether our son was going out or coming back in! He was about 8 years old. Very scary!
Cancel Update Comment

It's amazing how common sleepwalking is.

Monika Schott PhD
Expectations
Over the years, I’ve written about some of life’s certainties — birth, death, time and change. You can guarantee we will all experience those things. ...
0 comments
Read More

Rosy Cole
Florence
This is the moment she lets down her hair, newly washed at the Belfast sink, and offers it to a beneficent sun. The coiled braids, set...
2 comments
Read More

Stephen Evans
Milton: A Limerick
It is said that John Milton was Blind And the world that he served was Unkind So he waited to See Standing Gloriously For he couldn’t go blind in ...
2 comments
Read More

Stephen Evans
Coleridge: A Limerick
Samuel fancied a Dream But Xanadu vanished Abeam Of the pipe and the Puff For the love of the Stuff He imagined a higher Esteem...
0 comments
Read More

Rosy Cole Florence
17 June 2020
Thank you for your delightful comment. It is good to reflect on a way of life that has been lost.

Stephen Evans Florence
16 June 2020
Enjoyed this so much. Charming, evocative, and lyrical.

Monika Schott PhD Farm Reflections: Lands faraway
15 June 2020
Thanks Rosy. The story had to be told and I've been the fortunate person to be able to tell it. The ...

Rosy Cole Farm Reflections: Lands faraway
15 June 2020
Monika has taken us on a wonderfully illuminating journey, full of interest and humanity. We are so ...