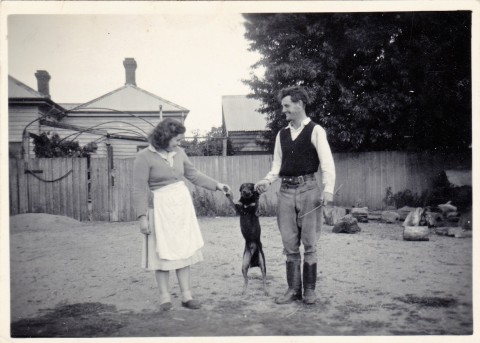 One year and one day to the day, I began this PhD research of the community once living at the Metro Farm, also known as the MMBW Farm, the Melbourne and Metropolitan Board of Works at Werribee and fondly, as the Farm.

One year and one day to the day has seen many recollections shared and some intimate memories provoked to prompt nostalgia and expose emotion that has been locked away for many years. A few tears have been shed too. It’s been an honour to be privy to those.

I never expected to know what I know today about the Farm or have met the people I have met, encountered such warmth or be affected in the way that I have, both professionally and personally. But that’s the beauty of life – full of life-changing surprises. It’s to the credit to all that support this work that knowledge is emerging of what it was like to live on the Farm and that it is being recorded today.

One year and one day to the day and I never expected to encounter a very living Farm community.

A living town in a life at honey speed, a calm and peace unwavering in the howl of withering leaves. Crested cockatoos cascade between trees of bare, shrilling whistles of a time unmoved, of a life once was in a land faraway.

Ghosts of yesterday dance to a squeeze box on the thread of glistening webs. They guard over full-as-bulls battles that spike in the dark near homes trimmed in baubles of roses and hydrangea, and stems of gladioli rivalling to be the best.

Families play and explore in a back yard of a vast faraway.

Today is little of the physical, of faded plum trees and pumpkins entwining along drains, of cream lilies and milk coffee and the horse and jinker tearing its sleeping traveller home as the epitome of the driverless car.

No. It’s not gone, not this life in a land bewitched on an elixir of memories, not within the dusty veil of isolation and cone of connection, where children mushroom and play hyekio and stockman call to their dogs.

Ghosts rejoice from sleeping ruins at the telling of their tales, from the tops of date palms and cypress trees and while watching football and sipping beer behind the goals, from under the water tank in a bass of riff, within a place oozing smiles more spirited and permanent than the Mona Lisa.

Cheers to a life in a living ghost town, a life at honey speed, wistful of lands faraway.

To some, it’s an honouring that’s grounding in subliminal bliss and stark in harsh reality, of little boys and girls scattering and fleeing, some in the clan ducking and weaving … a devastation that can coil as molten lead in sludge fused in hues of rotting seaweed.

All box tight in an infinity of recollections more fertile than the most precious, a box that holds the pause to remember a life that pulses through the veins of the salt bush, in the cooling dip in the bay under a biting sun where friendly flies line tent walls as a film of black or in the darkness of a waning moon with only a fire on the sand. Sea birds call on bellies plump and ripe … pretty and pristine in smashings of greens and tints of blue.

A life in a living ghost town, a life at honey speed in a land faraway.

Hinged in a haunting of melancholy is a place that once thrived. Listen carefully and you’ll hear it, the deep gloating of lifelong love, of wood being chopped for the stove and to heat the copper, feeding the pigs and milking the cows, churning the cream and butter to a one, two waltz in the Farm hall, a chasse to the Pride of Erin.

Amid this place of serenity are the giggles of mirth from boys peering behind bushes at men searching for their bottled stash, and scallywags scramming after pulling handbags tied to strings from the grasp of the inquisitive unsuspecting … the freedom to be without fear.

Bachelors living together, women and their cottage industries, ice boxes and kerosene fridges, tilly lamps and picking peas … the rose-gold worn as a cherished adornment of never-ending love that connects souls over lifetimes.

The sun prods for its always opening above foaming curls of white, rhythmic in their crashing and laced in the emotion of Antarctica. This space of breath, expanse of clarity of sight reveals the full beauty of perfect imperfection.

Cheers to a life in a living ghost town, in a life at honey speed, of a house and two cows in a land faraway.

These reflections come from a PhD research project investigating a community that grew soon after the Melbourne and Metropolitan Board of Works was founded in 1891 to treat Melbourne’s sewage at Werribee. As Melbourne grew, so did the work force to manage the treatment of the sewage, and a community of workers and their families that lived on site. The population peaked to over 500 in the 1950s. All but one family left the township in 1973; the last family moved off site in 1980.

The plant continues to treat Melbourne’s sewage and is now known as Melbourne Water’s Western Treatment Plant. The plant is about the size of the island of Santorini in Greece.

For more information on the project, please visit https://www.facebook.com/MMBWFarm/

The Farm is a colloquial term for the Melbourne and Metropolitan Board of Works (MMBW) at Werribee and now Melbourne Water’s Western Treatment Plant, currently treating nearly 60 percent of Melbourne’s sewage.