I don’t know why the caged bird sings. But I think I may have finally figured out why the others do. 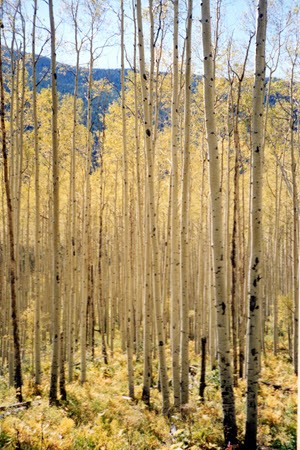 I take walks every day down a wooded path behind my home. Sometimes so many birds are singing it sounds like a choir. Other times there are only one or two at each turn of the path. Occasionally the songs sound like a dialogue, sometimes a Bach canon. But most often the sounds are clearly ecstatic, a brimming forth of some secret joy.

I believe I have discovered the source of that joy. Each bird is singing about how beautiful its tree is. How delicately shaped each leaf as it twists in the breeze. How the broad canvas of the whole creates ever evolving shadows on the ground. How the Fibonacci architecture of the branches leads right up to the sky.

Birds never sing about what time they have to get to the bird feeder, or whether they need a bath, or the bird next door, or even that tree they saw two weeks ago. They only sing of the beauty in front of them.

Each bird sings in its own language. Birds are very smart; each knows all the languages of all the birds. But when they sing of trees they sing in their own tongue, the one they hold in their heart.

And when they fly to the next tree, birds sing about how beautiful that tree is. And I agree with them.

I have never seen a tree that was not beautiful, from smallest sapling to startling senior. And unique – no tree the same as any other– even the aspen trees (which reproduce by what is called root sprouting and are in a sense one tree) are genetically identical but never quite the same in appearance. I wonder sometimes if  the beauty of trees has something to do with their uniqueness—and if we were more aware of it in humankind, we might see more beauty in each other.

Do the trees listen to the birds? I think so. Do they appreciate the praise? I’m not so sure. The lives of trees seem unconcerned with birds, or squirrels, or humans. They have their own purposes in their long lives.

What beauty do trees sing about?

I doubt we will ever know.

The Architecture of Trees 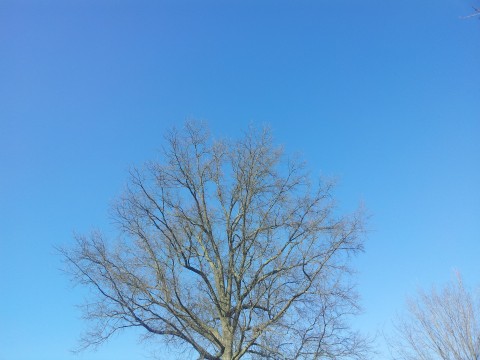 The architecture of trees fascinates me.

How do the branches know how to grow?

A complex algorithm it must be.

In searching for its own light, the branch serves the tree.

What does the branch know of the tree?

The result seems always the same:

Spare beauty against the blue.

No One Expects Metasequoia Glyptostroboides

I like trees. This fact will not surprise you if you’ve read this or this.

I’m not exactly sure when this relationship began. But I think it might have been in 1970, on a family vacation to California. We flew out to San Francisco and drove down the coast to LA, stopping for a few days in Yosemite, where I took 1000 or so bad photos, which are now bad and unwatched slides. And somewhere around there we also saw Redwoods.

There were many of them, I think, but not a whole forest of them. And I'm not sure but I beieve we saw one that you could drive through. I don’t really remember how they looked, exactly, or what I thought. But I remember how they made me feel. I remember being surrounded by a sense of immense age, impressed with the realization that there were beings on this earth measured in frames outside the human.

That was nearly fifty years ago, a long time for me, a moment for them. For some reason over the last few years, I have felt a strong desire to see them again. I’m not sure why, or why now. Maybe I hope something so ancient will make me feel young again. Or maybe just a worry that they, along with so much else, may soon disappear, from erosion or drought or acid rain or who knows. Things disappear – I have learned that. But they also appear.

There is a path behind my house where I walk once or twice most weeks, for the last decade or so. The crooked tree is there, so is the straight one, and most of the others I have written about. I was walking a few days ago when I saw this one. 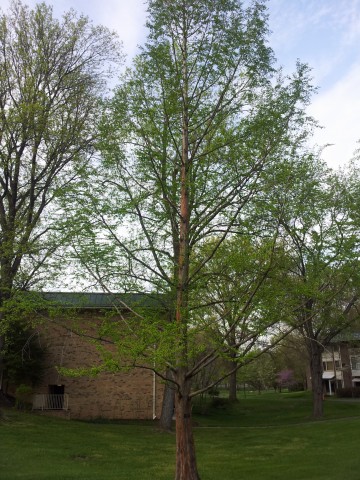 It’s a redwood. Not a California Redwood, but a Dawn redwood, Metasequoia glyptostroboides, an Asian cousin. It won’t grow as tall as Sequoia sempervirens or a large around as Sequoiadendron giganteum. But it is a redwood. A beautiful one. And it had been there, a hundred yards from my home, for years.

So keep an eye out for redwoods. My new motto is: No one expects Metasequoia glyptostroboides.

The Crooked and the Straight

Once in the deep forest there were two trees that grew only a few yards from one another, close enough that their roots could commingle in the deep earth. When they were young, they were very similar, straight and thin, with few leaves or branches. And they spoke to one another, as young trees do, of sun and wind and water. 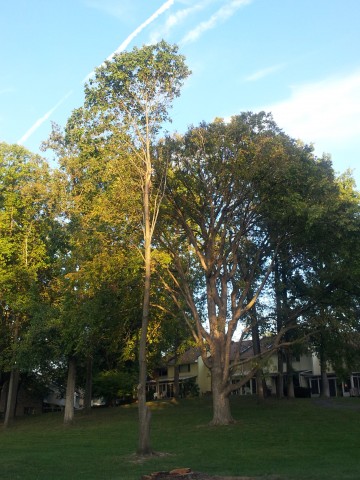 But as they grew older, they grew different. One of the trees continued straight and thin, with few leaves and branches, reaching up high over the others, first to greet the morning and the last to watch the evening fade. One day men came and cut down the straight tree and took it to the ocean, where they set it on a big ship, and fastened a mainsail to it.  And for years the straight tree roamed the world, far lands and wide oceans, till one day in a gale the ship sank. The tree plunged to the ocean floor, where it dissolved into the seabed.

The other tree grew thick and strong, its trunk crooked and twisting, with many branches spreading wide over the earth. And for years the crooked tree reached out, offering shelter for birds and animals through the harsh winter and hot summer. Then men came and cut down the crooked tree, and cut it into logs and burned it in their fires. And the ashes of the tree floated up, far up, on the currents of the wind until finally they too fell into the waves, sank to the ocean floor, and dissolved into the seabed.

The two trees knew each other even after so many years and so many miles, and spoke to one another as they lay commingled under the waters, as they had once under the earth. Each asked about the life the other had lived. And the straight tree told of wide oceans and far lands, and the crooked tree told of birds and animals, winters and summers. And each tree sometimes thought that it had the better life, and sometimes it thought the other.

And earth mother heard her children speak, and she whispered to them: be at peace, for Life chooses you. Then she lifted the dark seabed up into the bright air, and the trees began once more to grow. And when they were young, they were very similar, straight and thin, with few leaves or branches. And they spoke to one another, as young trees do, of sun and wind and water.