A quick pic from my place of birth

There was I wandering about on the Quays in Dublin by the River Liffey. It was sodden brass-monkey weather as I had to keep dodging the rain, like effing April showers that creep up on you and drench you with cold injustice. My camera was with me and I was holding a banjaxed umbrella in my left hand while attempting to snap away. I must have looked a sight in the dampened surroundings. All of a tic, I was resting against a wall on Merchant’s Quay opposite this well-known grand yoke of a building, you know, old and fancy-looking like them big places over the water in England. I was staring at this Georgian edifice when a well-dressed woman approached me saying “I think you need this more than I”. She thrust something into my hand and with that she was gone this fancy one with her confident Anglo-Irish tone to match her sensible, old-fashioned outfit. I glanced at my unexpected gift, a creased bit of paper that looked like it had been torn from a notebook with the date, 1937 inscribed on it. It read:

“To many an Irish person looking at this image of the Four Courts, it is redolent of ‘home’, of Ireland’s capital city, with the River Liffey flowing nearby. And yet the Four Courts (Chancery, King’s Bench, Exchequer and Common Pleas) based on a classical Palladian blueprint of James Gandon, a London-born architect who went to live in Dublin and designed a number of important public buildings in one of Europe’s largest and thriving cities at the zenith of British (colonial) rule there in the late 18th century.

“The benign aesthetic appeal of this landmark belies a turbulent past where colonial domination, religious and political marginalisation, historical loss and national resurgence are part of Ireland’s cultural texture.

"After the disastrous fire in 1922 during the Civil War, the newly-installed Free State government of the time had neither the inclination nor the money to restore the Four Courts to its former glory imbued with the influence of a foreign power in occupation of Ireland for over 700 years. To this day you can still see evidence of Ireland's recent bloody past in the form of bullet holes in the fabric of the building."

My mind was on other things so I stuffed the paper into my coat pocket and decided to take advantage of a dry spell as I stood there on the Quays. I took a photo of the reflection of the Four Courts in the slow-moving River Liffey. But instead of being satisfied with an upside-down image, I flipped the thing round to come up with a (right-way up) picture which was shown at the Royal Academy Summer Exhibition, London, in 2010 -  as attached to this article.

But as it happens, I've kept this weird, A5-sized battered manuscript gifted to me from this chance encounter with an unknown lady by the River Liffey and despite its air of stilted officialdom, this snapshot of history resonates with me as I lost something of great value - as did many other Irish people - in the catastrophic fire of nearly a century ago at the Four Courts. We Irish lost much of our (official) history. You see, the inferno took with it many of the nation's government records prior to 1922 and delving into our past is now made that bit more difficult because of the actions of some warring Irishmen fighting amongst themselves - not that of a foreign power, mind you.

The quirks of Irish history that make us, er, Irish, I suppose. 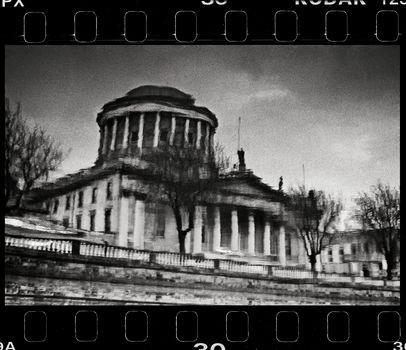 Stephen Evans
Man hopes. Genius creates.
The one thing in the world of value is the active soul,—the soul, free, sovereign, active. This every man is entitled to; this every man contains with...
1 comment
Read More

Rosy Cole Man hopes. Genius creates.
18 February 2020
Have to admit that I'm glad RWE gave his successors permission not to be 'pinned down' by his often ...

Monika Schott Change only ever happens forever
25 January 2020
Thanks Rosy. Wonderful analogy of two sides of a coin. The three guarantees we can't escape - life, ...

Monika Schott Change only ever happens forever
25 January 2020
Thanks, Chris. ?

Rosy Cole Change only ever happens forever
25 January 2020
'All that exists is an instinct to live in a way that is living for each.' This is surely the guidin...