Follow author Add as friend Message author Subscribe to updates from author Subscribe via RSS
I'm retired and living solo "out west" in the New Mexico desert. I've been an observer and blogger for years and usually have four or five blogs going but wrote for myself or for friends. A lot of it was travel stories or daily random postings -- but it was a good experience. Red Room allowed me to share things on a wider scale and with its demise, I (maybe) found a more public voice.

It's Good to Have Money

Baroness Lucia von Borosini Batten died at the age of 93 about ten years ago.  She was a local person; a socialite in her heyday. She was a German Baroness who was well off to begin with and always married men with wealth…several times…and she accumulated things. Lots of things –money was no object. Today, some would call her a hoarder but she was a collector with a few odd interests. For example, she collected miniature liquor bottles. She also collected rare and expensive paintings, tapestries, books, pottery, folk and primitive items, New Mexico colonial furniture, and especially Haitian art long before it was fashionable.

The Baroness purchased a circa 1875 adobe hacienda in a woodsy area of Albuquerque complete with acreage and water rights access to the acequia system. This was around 1954. The house was originally built by a local rancher who was the son-in-law of an early Governor. The Baroness and her second husband renovated and restored the adobe structure and moved in.  She started filling it.  Her third and final husband decided that they needed a library because her books were taking over the house so they built an adjacent structure in the same territorial style as the adobe house but with a large library space. The library looked like it was original to the property. Shortly after work was started, the husband died so Lucia was left to fill the library and the rest of the house with her collections. She knew what she liked and once it came in the door, it stayed. Actually, nothing seemed to get thrown out.

When the Baroness died she left the house and contents and a large endowment to the local museum foundation. They had no clue that this was going to happen and had to figure out how to manage the property and care for the collections.  Some of her valuable paintings were hanging on the walls of the open courtyard and zaguan. The property was secured and repaired and work began on cataloging the contents. It is still going on. The UNM library took some of the books. Many of the items were sold during a couple estate sales but some of the art and the collection’s better items are in the museum. Much of it remains in the house, which serves as the foundations offices. Some of it is warehoused. When the museum staff entered the house they had to walk sideways through some of the rooms because they were filled with art, furniture, carvings, pottery…everything.

An organization I belong to was fortunate to hold it’s annual membership meeting in the Batten library and get a tour of the house. The place does not offer tours and access is restricted. They have a live-in caretaker but the offices are busy during the day.  Photography is not permitted inside or outside of the house or library. These pictures are from the museum’s brochure.

I wish there were more of these hidden gems. These old adobe structures are melting away — literally.  There are old churches and a few public buildings that are regularly maintained but the vernacular adobe dwellings will slowly disintegrate if left alone. It takes someone with deep pockets to bring them back once they start to melt away.

The Promise of Rain

Winds blow the curtain and bring

the sweet scent of pine.

We are teased at first...

but the desert clouds relent.

Up on the far hill

and awaits the rain.

outlived his sons and daughters

Carlos Rey shakes in the wind.

and drinks it all in. 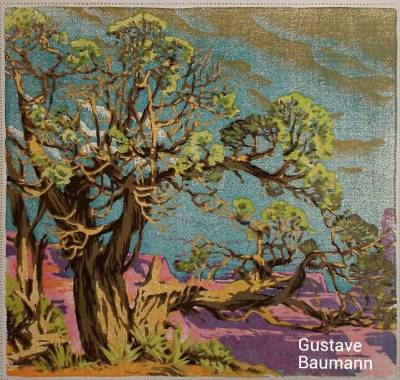 Carlos Rey is an old, stately Juniper that I "own" - or maybe he "owns" me. I'm just the last of many that have come his way. He probably witnessed Coronado and was "owned" by the King of Spain for many years....hence the name